Established in 1921, the Douglass Theatre hosted early jazz and blues greats such as Otis Redding, Bessie Smith, James Brown, Ma Rainey and Little Richard while running popular feature length films and serials.  This year marks the 100th anniversary of this historic gem, and to celebrate, Wycliffe was commissioned to write a piece that showcases the early beginnings and the 100 years of growth that make up the rich history of this iconic building.  The piece premiered on February 17th, in a “live stream” performance featuring Wycliffe and Friends.

Still, We Rise: He Heard My Cry

Commissioned by the Savannah Children’s Choir to commemorate D day in Normandy, France.  The lyrics were written by Roger Moss and are based on a quote from General Marshall on D Day with reference to the 320 Barrage Balloon Battalion.  Premiered April 29, 2018 at the Yamacraw Center for the Performing Arts in Savannah, GA and again on June 6, 2018 at the American Cemetery in Coleville-Sur-Mer, Normandy, France.

Celebration Suite: I, II and III

Commissioned by the U.S. Embassy for the 70thanniversary of U.S.-Sri Lankan relations.The work is representative of the historical and positive relationship between the United States and Sri Lanka since the recognition of Ceylon (now known as Sri Lanka) by President Harry S. Truman, and has elements representative of Sri Lankan culture, music and dance. Premiered during a US State Dept. Tour by Wycliffe Gordon February 2018. 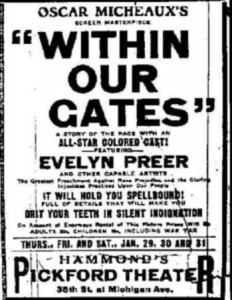 On August 26, 2011 at Columbia University’s Miller Theater, Wycliffe Gordon premiered a 78-minute score to Within Our Gates, a 1920 silent film by Oscar Micheaux, one of the most prolific and innovative African American filmmakers of the early 20th century. The score is performed live by an 18-piece big band with vocalists to a screening of the film, which depicts racial tensions in America at the time. Gordon picks up the baton and masterfully captures the essence, culture, and historical significance of the film in stunning composition, while seeking to interpret our past, define the present, and imagine the future. Originally commissioned by Jazzmobile, this project takes the bold leap of re-visioning and reinterpreting aspects of a pivotal work, while at the same time contributing to the expansion of the musical canon.

Beyond the Blackberry Patch

Wycliffe Gordon was commissioned by the Jazz Arts Group to create a 90-minute piece of music for ten musicians to tell the story of the King-Lincoln District. Eight Columbus City Schools in the district were invited to participate by helping Mr. Gordon with his research. Their study of their own neighborhood, its past, present, and future, has resulted in the working title for the piece—Beyond the Blackberry Patch.

The project is managed by Jazz Arts Group’s director of Jazz in Schools Judy Shafer. Designed in three stages, the process is being followed by governmental and business community members, the school community, and the arts community. The stages include: research and composition; presentation; and documentation. Mr. Gordon has interacted with eighty teachers at the Jazz Academy and has visited six of the eight schools involved to interact with their students. Much of the research on the past and present periods has been completed and during school year 2010-2011 the focus is on the future. The presentation will take place in early March 2012 at the newly restored Lincoln Theatre, the centerpiece of the district.

Beyond the Blackberry Patch is a collaborative project between the Jazz Arts Group’s Jazz in Schools program and the Columbus City Schools, with financial support from The Smoot Group.

The Apollo:  Yesterday, Today and Tomorrow

Wycliffe was commissioned by the Apollo Theater with support from Meet the Composer, to write a piece to commemorate the 75th anniversary of the theater. Wycliffe’s composition “The Apollo: Yesterday, Today and Tomorrow” was premiered May 13 & 14 2011 as part of the Harlem Jazz Shrines Festival and Wycliffe Gordon’s Jazz a la Carte program. The work was a progression of styles and featured music of “Yesterday”—Paper Moon and Mood Indigo sung by Carla Cook and Wycliffe; “Today”—What You Dealin’ Wit? performed by Terell Stafford, Savion Glover and Wycliffe Gordon; and “Tomorrow”—Rhythm Cone featuring Corey Wilcox and Grace Kelly.

On May 29, 2009, Wycliffe Gordon’s commissioned suite “Cyberswing – Jazz in the Digital Age” was premiered at Flushing Town Hall with the Queens Jazz Orchestra.

The Savannah Music Festival commissioned Wycliffe Gordon to compose a new work that was billed as a musical auto-biography and included the premiere of the suite, “Welcome to Georgia Town,” incorporating a septet (Printup, Clayton, Blanding, Reed, bassist Roland Guerin and drummer Willie Jones III, plus Gordon on tuba as well as trombone) and the Sweet Singing Harmony Harmoneers vocal quintet. The music ranged from gospel/spirituals to blues to marches to swing, with vocals interspersed, including some from Gordon and the musicians. The work was premiered in April 2008 at the Lucas Theatre.